Concussions in the Spotlight

According to the American Optometric Association, sports are not the leading cause of concussions – most concussions are attributed to falls. The AOA also stated studies have found concussed patients often display signs of vision problems, including accommodative disorders, convergence insufficiency and saccadic dysfunction, among others. Visual symptoms can be a key indicator of whether or not a person has had a concussion. 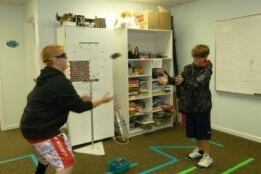 Athletic performance is dependent upon many factors, not the least of which are raw talent and motivation. Vision is often ignored once good visual acuity and/or protective eyewear is obtained. Our 24 years of experience with professional football and hockey players has shown us, however, that for maximum performance three vision factors should be optimized:

Visual Judgments: This area deals with the questions of “Where is the ball in space and where will it be when I need to catch it?” Examples include judging the speed and direction of baseballs or footballs, the spin of a tennis ball, the projected flight of a golf ball, or the final location of a hockey puck.

Vision-Directed Movement: The athlete must position oneself in the correct location to reach or hit a ball. Vision directs the decision in baseball whether to charge a ball in the outfield or to back up to catch it on the bounce, in basketball when to jump for a rebound off the rim or backboard, in football in moving appropriately to make a tackle, and in tennis to coordinate the toss of the ball with the movement and extension of the arm in serving.

Visuospatial Knowledge: Coaches covet players who are continuously in the right place at the right time, even if they are not the fastest or strongest athlete on the team. Anticipation, being able to “know” where the ball or the opponent is going to be, is enhanced with visuospatial knowledge. Those who have developed this to a high degree understand the angle at which a baseball will carom off a wall, judge the angle of attack when trying to make a tackle, determine the roll of a ball on the green in golf, choose the best part of the net in which to shoot a hockey puck, or determine the most likely shot from a tennis opponent during a particular part of a match.

Sports vision therapy makes use of basic and developmental vision therapy to improve one’s speed and accuracy of visual judgments, better understand one’s movement capacity and direct one’s movement accordingly, and develop visual spatial knowledge to a high degree. Enhancements in these areas provides one with the best opportunity to make the most of one’s talent and achieve a higher level of success in sports.

This 30 year old test involves reading aloud a list of written numbers while being timed and monitored for accuracy. This test requires the use of accurate eye movements, speech, language, and concentration. All of these elements have been shown to have potential impairments following a concussion. The King-Devick Test has been proven to be an accurate, objective, and reliable detector of head trauma, even in more subtle or “silent” concussion cases. With the new backing by the Mayo Clinic, this test can be used for baseline testing. If an athlete has any type of head trauma, the test is then repeated and the new results compared to the baseline to determine if an athlete should not be allowed to return to play until further medical evaluation.

We are able to provide this testing in our office and hope to create more awareness and education of concussions.